Thanks to the cooperation with the organization of the Friedensbrugg, Basel, Switzerland, especially their representative Ms. Monika Widemann and their financial support, the Roma Rock School Association has successfully implemented the project “Roma Rock School”.

The aim of the project was to establish a rock band with young talented Roma students by upgrading their music education, especially in the field of rock music.

For the sake of transparency and enabling equal opportunities for all musically gifted students, on 15.09.2017 an audition was held on which 17 students applied and 6 of the most talented students were selected as members of the rock band.

The students, under the mentorship of Nevrus Bajram and Alvin Salimovski, practiced for three months and created a new genre of music – rock songs from world-renowned rock bands with admixtures of Roma traditional music.

This project was a whole new experience for the students, especially given the fact that almost everyone was playing rock music for the first time. 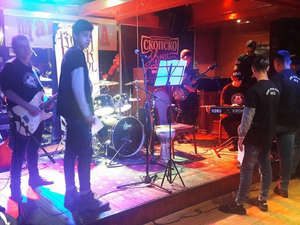 The final product of the project was organizing a rock concert in Club Marakana in front of an unknown audience. The concert was held on 16.12.2017 and there were around 300 guests which was a great surprise and pleasure for us. Representatives of embassies, NGOs, teachers and professors of music schools, representatives of the Peace Corps in the Republic of Macedonia and a large number of guests were amused by the mix of rock music with elements of traditional Roma music.